The Park joins in mourning for the untimely death of Professor Simon Keay.

Eminent scholar of archeology and the history of ports and trade in the Roman world, he was a fundamental figure in the studies on Portus and Isola Sacra, in understanding the articulations of the great port of imperial Rome with Ostia and the Trastevere Ostiense. Geophysical investigations, but also archaeological excavations: in particular, the research in the Imperial Palace of Portus made it possible to understand the articulation of the complex and to bring to light buildings such as the small amphitheater and the Navalia, whose existence was unknown.
In the territory, the geophysical investigations were carried out mainly on two fronts, one aimed at understanding the connection between Portus and Ostia through Isola Sacra, the other aimed at understanding the extension and articulation of the Claudius basin and identifying the Lighthouse-Island known from the sources, but of which no trace remains today.

He had very recently published a monograph about research at Isola Sacra, in collaboration with the Park: The Isola Sacra Survey: Ostia, Portus and the port system of Imperial Rome (edited by S. keay, M. Millett, K. Strutt and P. Germoni), 2020; previously he had published two volumes dedicated to Portus: Portus (edited by S. keay, M. Millett, L. Paroli and K. Strutt), 2005, and Portus and its hinterland (edited by S. Keay and L. Paroli) , 2011. In addition to these volumes, he has published numerous contributions and scientific reports dedicated to geophysical research and archaeological investigations conducted in Portus.

With the PortusLimen project, he has always combined the dissemination activity with the scientific and educational research of the students, through projects such as the Portus Project, on whose online blog he has gradually published the progress of research, and through extremely accurate virtual reconstructions that return the infrastructures of the port of Trajan.
His scientific skills are flanked by human qualities: we will always remember the elegance, calmness, courtesy and patience of Professor Keay, but above all the great passion that animated him, the love he felt for Portus and for research, and that flash in the eyes, full of strong motivation. 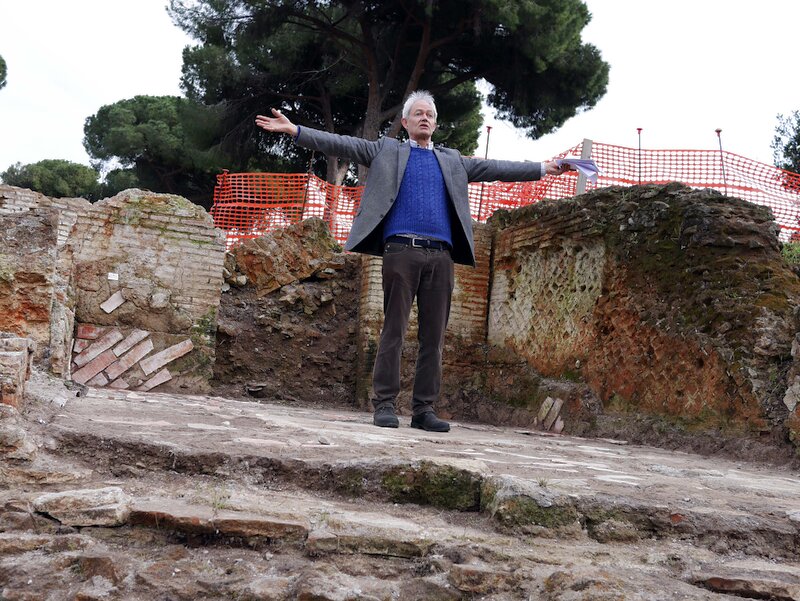