Imperial Harbours of Claudius and Trajan 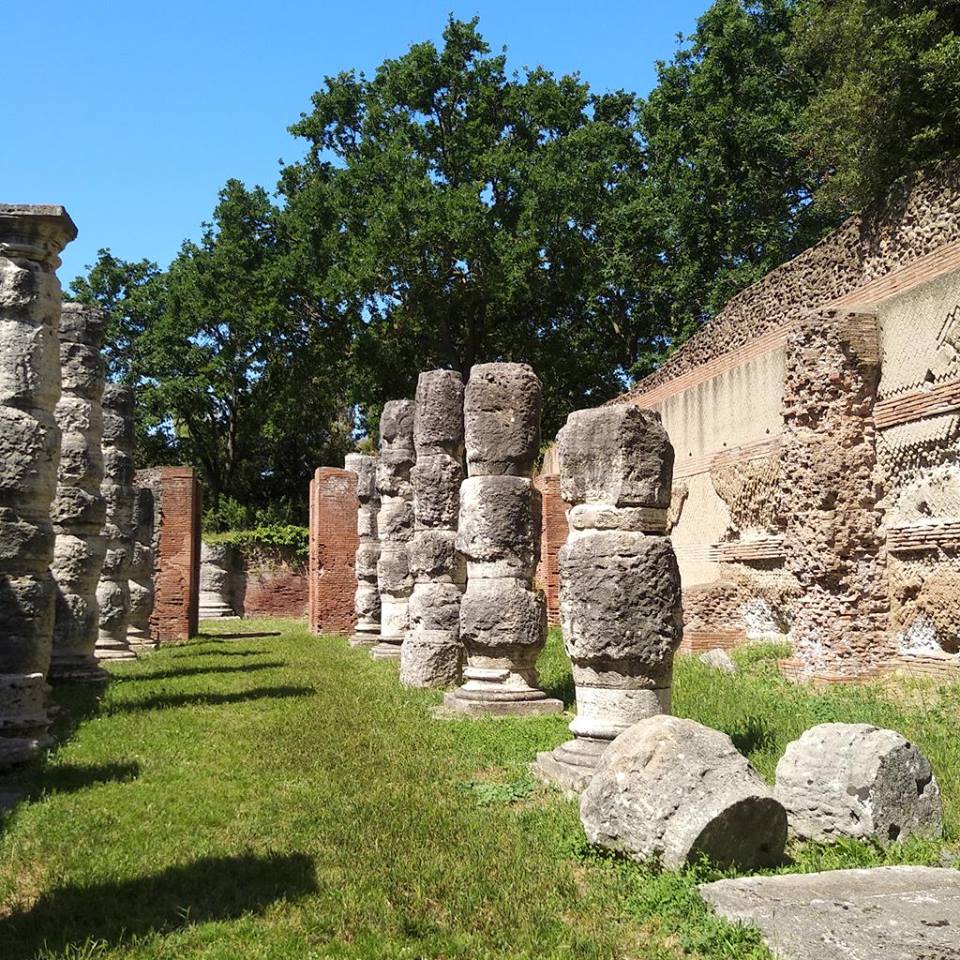 Archaeological area of Portus, the portico of Claudius with its tipical traverine columns, called "the Colonnacce" (i.e. "bad columns")

The Harbour of Claudius

In 42 AD Claudius started the construction of a big harbour about 3 km north of the mouth of the Tiber, to solve the problems related to the silting up of Ostia’s riverbanks.

It consisted of a 150 hectare port basin with two curved piers, docks, and a multi-storey lighthouse. The lighthouse, probably similar to the Alexandria ‘pharos’, was located on a small artificial island right between the two curved piers,  in order to divide the main access in a northern and a southern ‘mouth’.

Completed in 64 AD by Nero, the new harbour complemented the river harbour of Ostia and the maritime port of Pozzuoli, which had a key role in supplying Rome for grain since the 2nd century BC.

This massive infrastructure guaranteed a safe basin for the unloading of large cargo ships (Lat. naves onerariae) arriving from across the Mediterranean, and for the transfer of goods to smaller ships (Lat. naves caudicariae) sailing up the Tiber to Rome.

At least two artificial canals linked the complex to both the Tiber and the sea. The foundations of the northern pier are still visible behind the Fiumicino Roman Ships Museum approximately 1 km to the west.

On the ancient northern pier some functional structures relevant to the port are also visible, such as the so-called harbour Master’s office (Capitaneria), a cistern and some thermal baths (Monte Giulio complex); all works were completed in the 2nd century AD.

Only few years later (100-112 AD), the gradual accumulation of sediments led Trajan to build a new, inner basin: the Harbour of Trajan.

The harbour of Trajan

The Harbour of Trajan was designed to reuse the lighthouse and the piers of the harbour of Claudius, which formed the external basin of the new port system. Trajan added to these structures a 33 hectare hexagonal basin, a grandiose engineering work that immensely increased the docking points for ships. 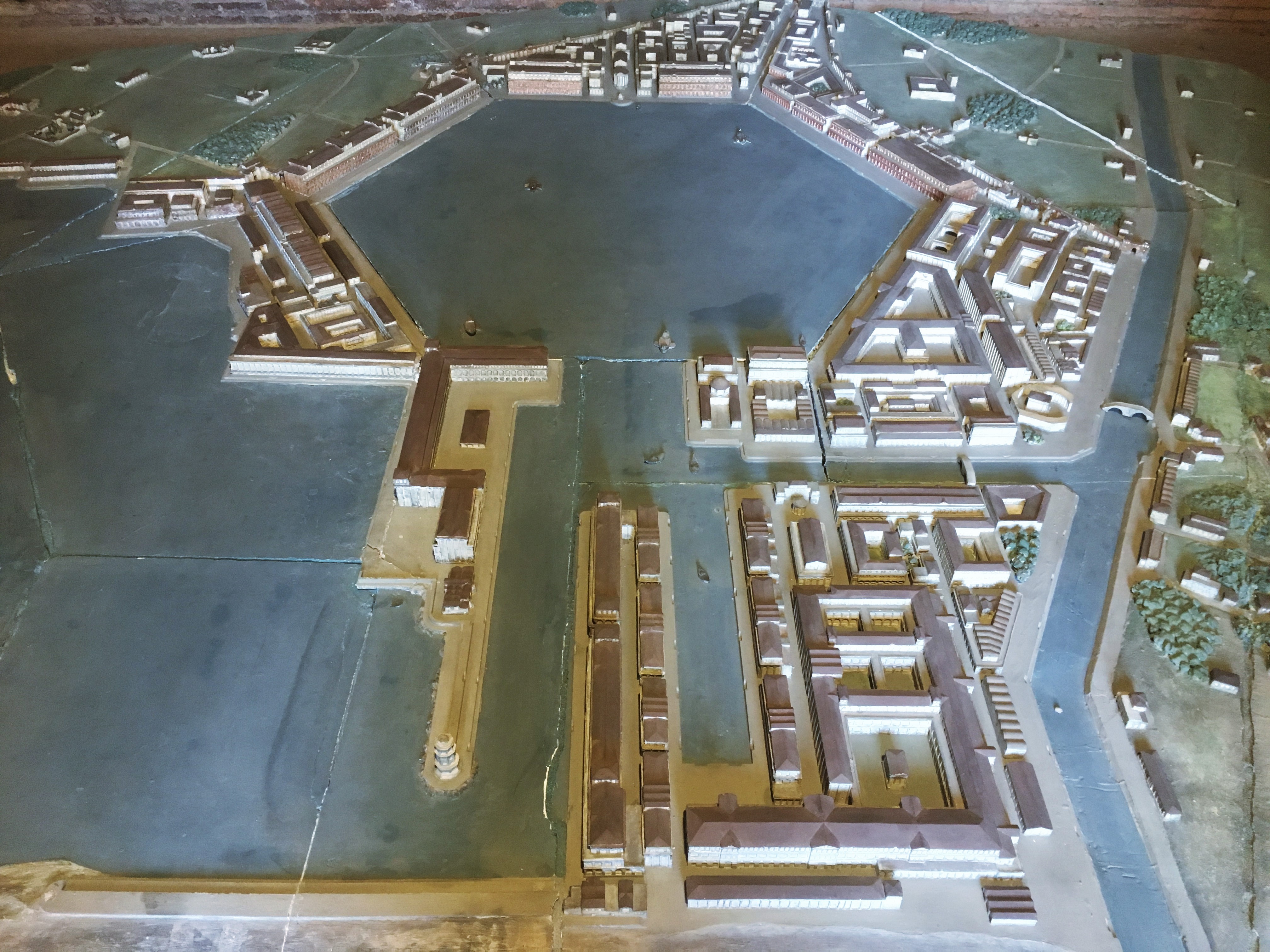 In addition, the emperor had various canals dug out, including the Fossa Traiana, today’s Fiumicino canal; these waterways allowed the flood waters to flow out into the sea, freeing Rome from the scourge of floods.

The new seaport soon replaced the one in Pozzuoli and a new road, via Portuense, ensured a direct connection to Rome.

The main buildings concentrated on the north-west side of the hexagonal basin, include the so-called ‘Magazzini Severiani’, a 2nd century AD large scale warehouse complex, and the so-called ‘Palazzo Imperiale’ (Imperial Palace) a massive building used as a ceremonial palace for wealthy, high-ranking travellers.

Another warehouse complex, the so-called “Magazzini Traianei” developed along the ‘Darsena’, the inland basin where fully equipped docks allowed the arrival, unloading, loading, and the access of smaller ships up the Tiber, to Rome.

In 314 AD, since the harbour had become an important key point for Rome’s food supply, the harbour itself and the village born nearby were officially declared an independent city named ‘Portus Romae’ (Lat. for “Harbour of Rome”) and provided with fortification walls. In time, due to soil geomorphology, the coastline advancing seawards, and the political and economic collapse of Rome, the area turned into a marsh, and the Tiber’s sediments filled the hexagonal basin, almost completely.

Today the coastline is 3 km far from the old center Portus, whose structures are surrounded by Fiumicino Airport facilities, road networks, and urban areas.

All the cultural sites of the Archaeological Park of Ostia Antica will be closed from November 6th until December 3rd 2020, as disposed by the decree of the Italian Prime Minister (November 3rd 2020), in order to reduce the contagion from COVID-19.

Entrance gate in via Portuense 2360 (Fiumicino, RM), under the viaduct of via dell’Aeroporto di Fiumicino.

For special requests and other opening times, reservation required by mail:

Due to the proximity to Fiumicino Airport, the area is a no drone zone. Find out more.